PGC SARS-CoV-2 Bulletin No. 6: First case of the new variant under Lineage B.1.1.7 detected in the Philippines

Through the biosurveillance efforts of the UP – Philippine Genome Center (PGC), in coordination with the Department of Health (DOH) – Epidemiology Bureau and the Inter-Agency Task Force (IATF) Task Force on COVID-19 Variants,  we report the first confirmed case of the SARS-CoV-2 B.1.1.7 lineage, more commonly known as the UK variant, in the Philippines. An announcement of this finding can be found in an official DOH press release dated January 13, 2021.

Genome sequencing data obtained from the subject detected the presence of 14 out of the 17 hallmark mutations associated with the B.1.1.7 lineage. These include the three mutations in the Spike protein region that are most notable for their potential biological effects: N501Y, P681H, and the 69-70 deletion; as well as two other mutations (A570D, D1118H) also commonly seen in members of this lineage. Furthermore, the classification tool being used globally to identify SARS-CoV-2 lineages was able to independently classify the viral sequence generated from the subject as coming from the B.1.1.7 lineage. Some of the 14 mutations detected occurred in regions of low sequencing coverage particularly in the Orf8 gene. We have likewise verified the presence of the N501Y mutation through Sanger sequencing utilizing ARTIC primers spanning this region.

The B.1.1.7 lineage has also been referred to as Variant of Concern VOC 202012/01 or 20I/501Y.V1.  This variant has been associated with an increase in the rate of COVID-19 infections in the United Kingdom, and studies have suggested that it may be more transmissible than other variants of SARS-CoV-2. It is notable for the unusually large number of mutations particularly in the spike protein region.  The constellation of mutations in this region is of particular interest because the spike protein is responsible for the attachment of the virus to human cells, triggering biological processes that will allow the virus to enter and infect the host. However, there is currently no evidence to indicate that this SARS-CoV-2 variant results in greater disease severity, or responds differently to existing vaccines. Since its detection in the UK in early December 2020, it has been observed in at least 51 countries around the world.

The rapid identification of the B.1.1.7 variant of the SARS-CoV-2 virus from a returning overseas Filipino who travelled from Dubai, United Arab Emirates and who tested positive for the coronavirus upon arrival in Manila on January 7, 2021 with close coordination with relevant government agencies at the national and local levels, highlights the importance of a robust genomic biosurveillance framework in our ports of entry and around the archipelago.  This national genomic biosurveillance framework being led by the DOH-Epidemiology Bureau with support from the national government, DOST-PCHRD, DOH-RITM and UP NIH to test, identify, track and trace new variants of the virus is critical as we all work together to combat this COVID-19 pandemic.  As the World Health Organization calls on nations to ramp up efforts on coronavirus sequencing, the fact that our government is already on it NOW validates the initial investments made by the University of the Philippines, the Department of Science and Technology and the Commission on Higher Education (CHED)-PCARI to train young experts in genomics and bioinformatics in the country. 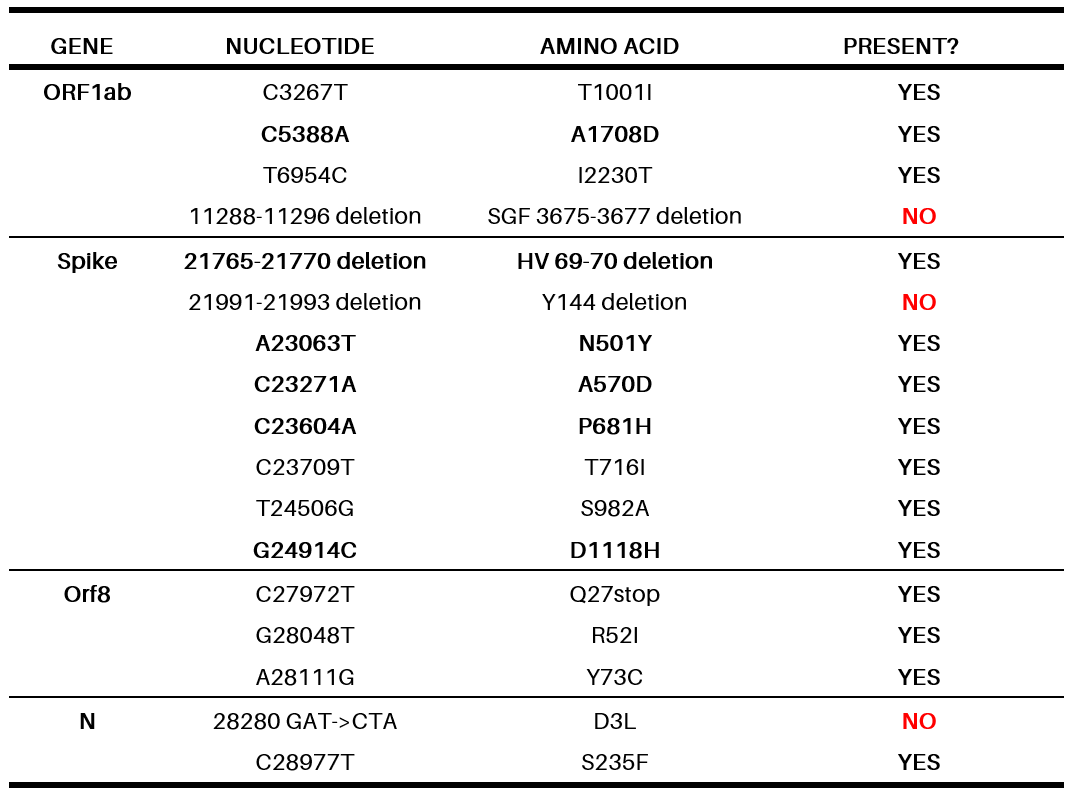 Table 1. Observed mutations in Lineage B.1.1.7 from the first case of the VOC 202012/01 variant detected locally using whole genome sequencing and capillary sequencing on 12 January 2021 from a passenger who travelled to Dubai on 27 December 2020 and who tested positive for the SARS-CoV-2 virus upon return to Manila on January 7, 2021.