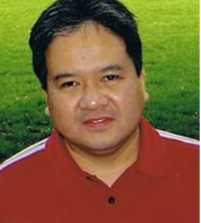 Dr. Garcia has a dual background in biomedical research and in the management of technology and innovation. He did his PhD in Molecular Biology at the Australian National University and his life science-MBA (Master’s in Bioscience Enterprise) at the University of Cambridge in England, in collaboration with the Massachusetts Institute of Technology’s Sloan School of Management.

Dr. Garcia did postdoctoral work in New Zealand (University of Otago Medical School), Paris (Hopital de la Pitie-Salpetriere/Universite Pierre et Marie Curie), the United States (Case Western Reserve University School of Medicine) and London (University College London), before being appointed senior research scientist at Cancer Research UK’s Beatson Institute in Scotland. He has worked on Merck- and Roche-funded projects involving characterization of drug targets for pain and development of drug screening assays for disrupting cellular proliferation in cancer, respectively. After some 15 years in the laboratory, he went to business school and later became Manager at the London Biotechnology Network. In the latter role, he was also biotech and pharma adviser and consultant to UK Trade & Investment, the Canadian High Commission in London, Innovation Norway, the French Embassy in London and Think London (London’s inward investment agency), He has helped broker drug development partnerships between academia and industry, as well as company to company collaborations. Rey has published both scientific and business articles in refereed journals and has contributed chapters in several books.

Rey returned to the Philippines in 2010 as a Balik-Scientist. He was appointed later that year as a Full Professor at the National Institute of Molecular Biology and Biotechnology, University of the Philippines Diliman, and concurrently as UP System Director of the Technology Transfer and Business Development Office, a position he held for 3.5 years. He currently heads the multi-awarded Disease Molecular Biology and Epigenetics Laboratory.