Plant cytogenomics in the post-genomics era

Abstract
The release of the first human reference genome in 2003 marked the beginning of the post-genomics era when genetics progressed beyond gene-centered analyses to a myriad of omics approaches. Genome sequencing technologies have advanced dramatically from Sanger, second/next-generation, to third-generation sequencing platforms. Also, genome assembly methods and tools have evolved contemporaneously, resulting in a dramatic drop in genome assembly cost. Consequently, more than 360 plant species’ genomes have been assembled ever since the first plant genome, Arabidopsis thaliana, was published in 2000. An important lesson realized from these assemblies is that even the best methods fall short in generating an exact complete genome assembly, thanks to an abundance of repeats, whole-genome or subgenome duplications, and heterozygosity in most plant genomes. Nevertheless, these inherent “dark matter” in plant genomes themselves could be leveraged to address essential issues in genome assembly like understanding the global landscape of a genome prior to sequencing to decide assembly strategy and understanding lineage-specific genome evolution. For instance, genome-wide characterization of repeats (repeatomics) has been useful in many assemblies by not only quantifying different repeat families in a genome but also cytogenetically mapping them to understand their chromosomal distribution. This approach does not only allow visualization of genomic niches occupied by different repeat families but can also leverage the power of variation in repeat abundance across different chromosomes to potentially slice complex genomes into manageable parts; thus, reducing genome sequencing complexity. Here, I present some critical roles of cytogenetics in genomics research (cytogenomics), especially in repetitive and polyploid genomes, and how repeatomics can be a central player in whole-genome sequencing projects in the post-genomic era. 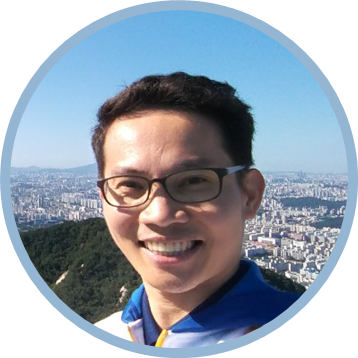 About the Speaker
Nomar Espinosa Waminal is currently serving as a Research Professor under the Chromosome Research Institute at Sahmyook University, Seoul, Republic of Korea. He was a Samsung Global Scholar and received his Ph.D. in Crop Science and Biotechnology from Seoul National University. His current work involves the use of bioinformatics and molecular cytogenetics tools like fluorescence in situ hybridization (FISH) to identify, quantify, and cytogenetically map single-copy and repetitive genomics sequences for genome assembly and breeding of medicinal and industrial crops like ginseng (Panax ginseng), soybean (Glycine max), and several cabbage species (Brassica).
Nomar has a keen interest in developing tools to simplify cytogenomic analyses, which led to a few patents. He also received intensive training in plant metaphase chromosome accumulation for flow sorting of single chromosomes under the Czech Academy of Sciences.