Protein-DNA interactions play an important role in gene expression, DNA replication, DNA integrity control, and DNA damage repair. Understanding the mechanisms of these processes requires the knowledge of kinetics (rate constants) of reversible Protein-DNA binding. Electrophoresis has been the workhorse method for in vitro studies of such interactions. Classically, electrophoresis mobility shift assay (EMSA) on slab gels is used in these kind of studies, however, it is not suitable for kinetic studies. We have developed “Kinetic Capillary Electrophoresis (KCE)” – a set of highly-sensitive and fully-quantitative methods, which can be used to study kinetics and reaction mechanisms of protein-DNA interactions. In this lecture, I will introduce the concept of KCE, its theory, its mathematics, and examples of its applications. Recommended reading includes two review articles: Electrophoresis 2007, 28, 69-88and Analytical Chemistry 2015, 87, 157-171. 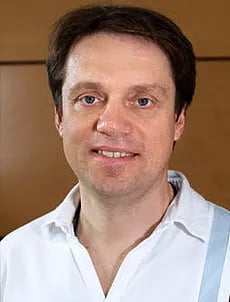 Prof. Sergey N. Krylov obtained his M.Sc. degree in Physics in 1987 and Ph.D. degree in Biophysical Chemistry in 1990, both from Lomonosov Moscow State University. His postdoctoral training was with Prof. H. Brian Dunford and Prof. Norman J. Dovichi at the University of Alberta. In year 2000, he accepted a position of Associate Professor in the Department of Chemistry at York University in Toronto, where he was promoted to Professor in 2006. In 2003-2013, he held Canada Research Chair Tier II in Bioanalytical Chemistry. In 2015 he was appointed York Research Chair Tier I. He is a founder and Inaugural Director of the Centre for Research on Biomolecular Interactions at York University. He is recognized internationally for his pioneering work in the fields of chemical cytometry, kinetic analysis of affinity interactions, and selection and applications of oligonucleotide aptamers. He recently became interested in development of innovative technologies for cancer subtyping and continuous-flow small-scale chemical manufacturing. His research contributions have been recognized with a number of awards including Petro Canada Young Investigator Award, Premier’s Research Excellence Award, President’s Research Excellence Award (York University) and two recognitions from the Chemical Society of Canada: McBryde Medal and Maxxam Award.