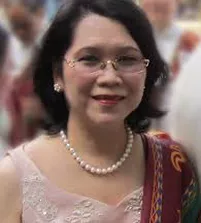 Vice-President Gisela Padilla-Concepcion is not only known for her expertise in marine natural products research, and the biomolecular and biomedical sciences, but also for her science advocacies. She is also considered as a champion of voluntarism and is very active in the campaign to increase awareness of the importance of S&T and R&D to socio-economic development.

Graduating in 1995 as the Most Outstanding Ph. D. graduate in Chemistry of her batch, Vice President Padilla-Concepcion also finished her bachelor’s degree in Chemistry cum laude, and master’s degree in Biochemistry at the University of the Philippines. She started working in UP as an instructor in the Department of Chemistry of UP Los Baños in 1975. The following year, she transferred to UP Diliman, eventually becoming an assistant professor. In 1989, she began her research on bioactive compounds from marine sponges. Her interest in marine life was further deepened when she became a University Researcher at the Marine Science Institute (MSI). She later became a professor at the UP MSI. Currently she leads projects to study bioactive compounds from microbial symbionts of marine mollusks and neuroactive peptides from the venom of Conoidean snails.

From 1997 to 1999, Padilla-Concepcion was President of the Philippine Society of Biochemistry and Molecular Biology. In 2004, in an effort to strike interest and attract more people to the sciences, she initiated and became the Editor of Star Science, a weekly science column in the Business Section of the Philippine Star. She also founded and is co-Editor of the ISI-listed Philippine Science Letters online free access journal.

Since 2006, Padilla-Concepcion has organized and led the Philippine-American Academy of Science and Engineering (PAASE) campaign to increase government support for science and technology in the country. This resulted in the first allocation of P500 million for the National Science Complex and of P200 million for M.S. and Ph.D. scholarships in the sciences. In 2011-2012, she served as President of the PAASE.
In 2007, Padilla-Concepcion chaired the Office of Special Initiatives for the Advancement of the Sciences, under the Office of the Dean of Science, where she was actively involved in the promotion of various programs in the college, as well attracting individuals and groups willing to invest in the sciences. She would also chair the Bio-Physico-Chemical Techno Incubation Core Facility of the National Science Complex, operated by the College of Science in UP Diliman.

For her various efforts in scientific research and in the promotion of the sciences, for her studies on bioactive compounds from marine organisms and the appreciation and protection of marine life, Padilla-Concepcion was chosen as the 2013 Philippine Federation of Chemical Societies Awardee for Chemical Research, the 2010 honoree for Outstanding Achievement in Science and Technology of the Philippine Development (Ayala) Foundation USA. A year before that, she was given the Paz and Severino Koh Lectureship Award in Science by the PAASE. She also received the 2008 Centennial UP Alumni Association (UPAA) Outstanding Award for Science and Technology, the 2007 National Research Council of the Philippines (NRCP) Achievement Award in Chemistry; the 2006 Gregorio Y. Zara Award for Basic Research; the 2006 NAST-LELEDFI Award for Outstanding Research in Tropical Medicine; the 2005 Philippine Society for Biochemistry and Molecular Biology (PSBMB) Research Award, and the 2002 Dr. Eusebio Y. Garcia Recognition Award for Molecular Biology & Molecular Pathology by the NRCP.

Vice-President Padilla-Concepcion was inducted as Academician in the National Academy of Science and Technology (NAST) in 2008. She was cited for her “outstanding contributions and accomplishments in the field of marine natural products as team leader of various research projects to discover novel marine compounds with anticancer, antibacterial, antituberculosis, antimalarial, anti-inflammatory and immunosuppressant properties; for her pioneering efforts to identify the cellular and molecular targets of these compounds to develop targeted drug delivery systems and demonstrate efficacy in animal models; for her studies on the biochemistry of cancer and certain infectious diseases, for mentoring graduate students and research associates and imbuing them with the passion to pursue scientific research; for her inspiring leadership in the campaign to promote and increase government support for Science and Technology in the country.” In 2009, she was awarded the rank of Scientist I, and in 2012, the rank of Scientist III, under the UP Scientific Productivity System. Padilla-Concepcion has more than 83 publications in international peer-reviewed journals and has 6 patents and patent applications.

Among her initiatives as Vice President for Academic Affairs, Padilla-Concepcion has led in enhancing existing programs and establishing new ones to support faculty and REPS (Research, Extension and Professional Staff) development, such as the 1) PhD and MS Fellowships program, 2) foreign-trained PhD Faculty Recruitment program, 3) Visiting Professor program, 4) Honor Graduate Faculty Fast Track program, 5) Research Dissemination (Travel) Grants (RDG), 6) short-term training and postdoctoral stints of faculty and REPS In foreign universities, 7) Artist-, Scientist- and Academic-in-Residence program, and 8) externships in and workshops with industry. Substantial grants to faculty and REPS are now funded by the Universityunder the Emerging Inter-Disciplinary Research (EIDR) program and the Enhanced Creative Work and Research Grants (ECWRG) program. To recognize high levels of achievement and productivity, the International Publication Awards (IPA) have been tiered to provide greater rewardsfor publications in higher quality journals. Increased monetary awards are also being given to those who have qualified under the Arts Productivity System (APS) and Scientific Productivity System (SPS) of the University.