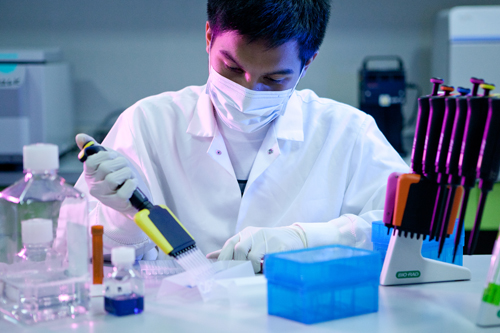 DNA testing is the most powerful tool for human identification. Since its discovery in the mid-1980s, DNA profiling had caused a paradigm shift in the identification of victims, perpetrators and witnesses in numerous cases. The identification of genetic markers that are highly variable in human populations is a major step toward the establishment of reference as well as criminal databases needed for statistical evaluation of matching DNA evidence, or identification of repeat offenders, respectively. In addition, the chemical stability of a DNA molecule against harsh environmental challenges such as extreme temperatures and high humidity makes it more suitable for criminal investigations which lasts for months, even years in the Philippines. Moreover, the fact that a person inherits one’s DNA from one’s parents, provides an investigator with alternative reference samples, when an individual’s own reference biological sample is unavailable.

Recent advances in forensic DNA testing are now paving the way for reforming the manner by which cases are resolved in courts of law through the way suspected offenders are apprehended during a criminal investigation. Firstly, the availability of new markers which are more variable across different populations, adds to the increased power of discrimination once more genetic markers are used. From the time when DNA testing only involved seven to nine genetic markers to evaluate if crime scene evidence matches a suspect’s profile, as well as to determine relationships, to the current battery of 21 autosomal markers and 23 male-specific markers, the capacity of DNA profiling to differentiate individuals has increased significantly. The use of automated and expert systems for large-scale analysis has also been found to reduce manual errors and to increase output per unit time. The use of several dyes in a single multiplex system provides more information from the same amount of genetic material compared to reactions targeting only one genetic marker but requiring the same amount of DNA that was common in the early 1990s.

More recent developments involve the use of information derived from mutation rates of a group of genetic markers, known as short tandem repeats, located on the Y-chromosome (Y-STRs), which enables us to differentiate from paternally related male persons. Scientists, including those in our laboratory at UP Diliman (www.dnaforensic.org), are continuing to search for new and better polymorphic markers for purposes of human identification. This work will be undertaken within the Program on Forensics and Ethnicity of the Philippine Genome Center wherein advances in genomics such as next generation sequencing technology (NGS), as well as microarray work, will be used to accelerate the process of discovery of genes which are highly variable in Philippine populations (www.localhost/genome/public_html).

Secondly, the development of more robust reaction mixes coupled with shorter PCR products has also opened the possibility of re-testing old case samples which may have yielded negative results such as in cold cases, or in the re-opening of cases wherein prisoners continue to claim their innocence and relevant biological samples are still available (post-conviction DNA testing). Recently, the Innocence Project Philippines Network was launched at the National Bilibid Prison and the Correctional Institute of Women (https://www.facebook.com/InnocenceProjectPhilippines). The Network consists of student volunteers in legal aid clinics of the law schools of the University of the Philippines, De La Salle University and Ateneo de Davao; law faculty, lawyers providing pro-bono work, NGOs, private citizens and scientists at the UP DNA laboratory who are working together to evaluate prospective wrongful conviction cases. In its initial phase, the volunteers are tasked to find cases that have become final and executory but that may be re-opened for post-conviction DNA testing following the Rules on DNA Evidence that was promulgated by the Supreme Court in 2007. In the Philippines wherein DNA testing of cases such as People vs. Hubert Webb et al. and People vs. Paco Larranaga et al. could have provided answers to many questions and confirmed or negated witnesses’ testimonies, the use of post-conviction DNA testing, that is now recognized by the Supreme Court, remains to be realized.

Thirdly, the US FBI recently reported the development of faster and portable DNA analytical systems that would allow investigators to generate DNA profiles on site, thereby increasing the chances of apprehending the real perpetrator almost in real time. The speed and accuracy of these portable DNA systems are crucial in criminal investigations. In the Philippines where no DNA legislation exists governing the collection, handling and storage of crime scene evidence as well as in the establishment and security of criminal databases, the use of these analytical systems will not have its maximum effect. More importantly, as science, particularly genetics, continues to expand its forensic applications, there is an urgent need for revising the curriculum of relevant courses such as criminology, public administration, political science and law, into incorporating relevant science and genetics topics, in order to improve the education of our future law enforcement personnel, administrators, politicians, legislators, lawyers and judges. Only with an increased appreciation and recognition of science and its numerous uses at the service of society, could we maximize the fruits of scientific research and discoveries that scientists, including Philippine scientists, are making for the good of all.

The author received the NAST Outstanding Young Scientist Award in 2003 for Molecular Biology. She is the current head of the DNA Analysis Laboratory, Natural Sciences Research Institute of UP Diliman, the director of the Program on Forensic and Ethnicity of the Philippine Genome Center, and a member of the Board of the Innocence Project Philippines Network. She has appeared as expert witness in cases involving disputed parentage issues and in relation to criminal cases. She provided her technical assistance during the formulation of the Rules on DNA Evidence and her opinion on different bills regarding forensic DNA technology. The UP-NSRI DNA Laboratory continues to offer its parentage testing and DNA profiling expertise as part of its commitment to serve the community. The laboratory may be contacted at 632 9252965, 639189136284 and [email protected]