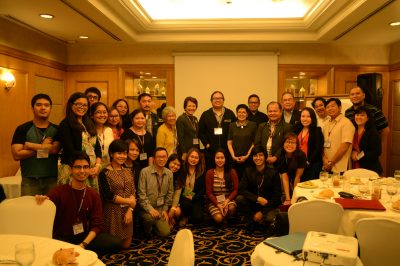 The Philippine Genome Center conducted its Year-end review and R&D planning last December 12, 2017 at the Banyan/Cedar Hall, Richmonde Hotel, Ortigas, Pasig City. Dr. Cynthia P. Saloma, PGC Executive Director opened the meeting by welcoming the attendees comprised of the PGC executive committee, R&D program directors, project leaders, core facility and administrative staff. Dr. Saloma emphasized the importance of planning the projected Key Performance Indicator of the center and streamlining its operations for the next five years. Afterwards, the room grouped into their respective program/facility/project for a breakout session to plot their agendas for the next year. As approved in the 1324th BOR last January 26, 2017, PGC revised its organizational chart with changes in the R&D programs, namely: Agriculture/Livestock/Fisheries/Forestry; Health; Biodiversity and Ethnicity; Computational Genomics & Systems Biology; and the now combined DNA Sequencing and Bioinformatics Facility. After the session, each program presented their plans and key performance targets for 2018.

Pertinent officials from the University of the Philippines System were also present to each give an overview about their respective units and their correlation to PGC. The first guest speaker was VP Jose “Butch” Y. Dalisay, Jr. from the Office of the Vice President for Public Affairs, who made a brief discourse about “Stakeholder Engagement through Effective Science Communication”. VP Dalisay broached in his talk the difficulties of popularizing science research and bringing it to the grasp of ordinary citizens. He stressed that, in writing about science research, one must take into consideration how the public easily fear what they do not understand. Thus, it is the responsibility of communicators like himself to help promote science that is simplified, interesting, and most of all, accurate.

VP Joselito G. Florendo, from the Office of the Vice President for Planning and Finance, then presented “Financial Management, Revenue Generation, and Auditing Rules in UP”. VP Florendo shared that there are some challenges to be met in being part of the approving body handling the finances of the UP System. And with this, he acknowledges that the system has an intricate process that most certainly, must be followed. He ends his talk by telling everyone that his office is always open for concerns and consultation.

This was followed by a special message from VP Maria Cynthia Rose Banzon Bautista, from the Office of the Vice President for Academic Affairs. VP Bautista expressed her commendation of PGC as a unique, adaptive unit and first of its kind in the UP System, as she states, “PGC is of UP, but not just of UP, because its scope is beyond UP.”

The last guest speaker to present was VP Teodoro J. Herbosa Executive Vice President of the UP System.  EVP Herbosa is also a medical trauma surgeon at the Philippine General Hospital. His talk tackled “PGC’s role in UP’s Plan of a PGH in Diliman with an Institute of Cancer Genomics”. EVP Herbosa is positive that the establishment of a new PGH will be significantly beneficial to the Filipinos; especially with an institute that caters to Cancer genomics, as Cancer is the third leading cause of morbidity and mortality in the country. A tedious task but one which he is very willing to accomplish.

Lastly, Dr. Neil Andrew Bascos, PGC Deputy Executive Director, closed the year-end review meeting by thanking all the attendees and the guest officials from the UP System.  He remined everyone that the PGC Administration is always willing to help facilitate the smooth operation of the center.  “We are all part of the grand machine that is PGC” and the center is looking forward to another productive year as we move to our new home in 2018.

View all posts by rsbacsa