Noises and dynamics in cells: Mathematical modeling in systems biology

Gene expression noise is ubiquitous in cells. One source of noises is that genes are expressed in bursts, as both mRNA and protein bursts were observed in the past. In order to simulate gene network dynamics with noise effects, I’ll talk about the Langevin equation formulism for gene production in bursts.

The results in the application of this Langevin equation approach for the development of model organism C. elegans will also be discussed. In this work, we study the noise propagation in a regulatory network of C. elegans. In the development, the distal tip cell (DTC) migration is under a tight timing control, which is achieved by a genetic network composed of multiple feedforward pathways. Feedforward loop has the potential to filter the noise, but such noise-filtering is asymmetric, i.e. it works at either the “on” or the “off” states in the source. With multiple, interlinked feed forward loops, we show that the propagated noises are largely filtered regardless of the states in the source. Positive feedback loops are also helpful in maintaining the desirable activity of the target gene. We demonstrate that the incomplete penetrant phenotype observed in mutants can be attributed to both noises and dynamics of the system. 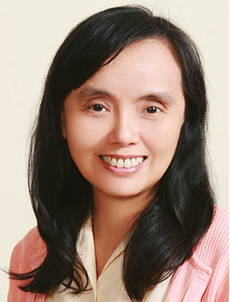 Prof. Chao-Ping Hsu obtained her B. S. and M.Sc. degree in Chemistry in 1990 and 1992, both from National Taiwan University. She worked with Prof. R. A. Marcus and obtained her Ph.D. degree in Chemistry in 1998, from the California Institute of Technology. She was a Miller Fellow in University of California, Berkeley, with Prof. Graham Fleming, Prof. Martin Head-Gordon and Prof. Teresa Head-Gordon. In year 2002, he accepted a position of Assistant Research Fellow Institute of Chemistry, Academia Sinica, where she was promoted to Associate Research Fellow and Research Fellow in 2007 and 2013, respectively. She is internationally recognized by her pioneering work on characterizing the electronic coupling in electron transfer and energy transfer with first-principle quantum chemistry computation. She is also interested in developing mathematical modeling work for systems biology. She has received numerious of awards, including the Heritage Prize from the Li Foundation in 2002, Wu Ta-You Memorial Award from the National Science Council (current Ministry of Science and Technology) in 2008, The Junior Researcher Award from Academia Sinica in 2009, the Pople Medal from Asia-Pacific Association of Theoretical & Computational Chemists in 2010, the Outstanding Young Scholar Award from Shui-Mu Foundation of Chemistry in 2011, and the Outstanding Research Award from the National Science Council (current Ministry of Science and Technology) in 2011.