New York University dean for science Michael Purugganan talks about mapping genes and genomes and shares insights about evolution and how it helps us understand the world. 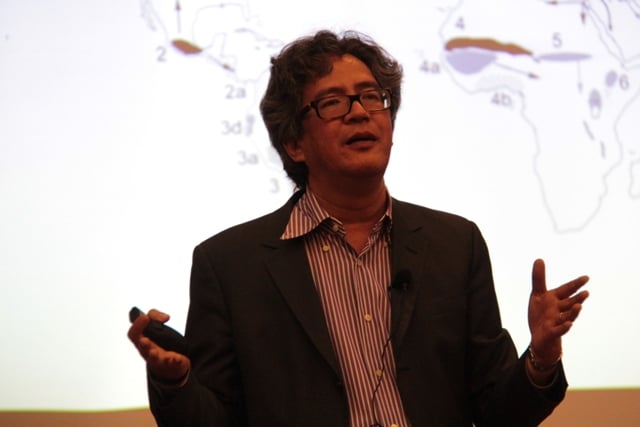 MANILA, Philippines – The marriage of sophisticated computing technology and the abundance of data in genomics is now allowing us to rethink how species – even our own – have evolved, a top Filipino scientist said.

In his brief visit to the Philippines, New York University (NYU) dean for science Michael Purugganan still found time to talk to Filipino students about mapping genes and genomes and share his insights about evolution and how it helps us understand the world.

“In 20 years, we’ve gone from getting data from single genes to now looking at whole genomes in trying to understand the same question. Now we much have a larger set of data to answer the questions we’ve had,” Purugganan said during his talk at the auditorium of Institute of Biology in the University of the Philippines in Diliman (UP Diliman) on January 30.

He added, “Science is not only progressing in technology but in our expectations on what it takes to advance science.”

A major part of Purugganan’s research is on rice, a staple food eaten by at least half of the world’s population, including Filipinos.

“I am interested in the diversification of rice species in different land types and how these things evolve,” said Purugganan.

Among his current research interests is studying the evolutionary forces that act in plant adaptation.

Purugganan was asked about the relevance or relation of his studies to efforts to develop climate-resistant rice varieties at the International Rice Research Institute (IRR) in Los Baños, Laguna, and other rice-producing countries.

Purugganan also shared his fascination with the Banaue Rice Terraces and on growing upland rice.

He briefly mentioned some heirloom rice varieties in Banaue which they included in some of their genome mapping projects such as tinawon and pinidwa.

Purugganan, his colleagues at his laboratory, and his other collaborators have mapped over a hundred varieties of rice grown in different parts of the world.

In 2011, a study he was a part of was published in the Proceedings of the National Academy of Sciences (PNAS). His team found that rice varieties might have originated from the Yangtze Valley in China, contrary to previous studies indicating two origins: India and China.

Meanwhile, one of his most recent works on rice was published in August 2014 in the journal Nature Genetics. It tackles mainly the cultivation (domestication) of African rice (Oryza glaberrima) and how its evolution is parallel to the Asian rice species Oryza sativa.

Purugganan also touched on other evolution-related topics such as agriculture, especially plant domestication, and how it could be studied using genomics, as well as his laboratory’s researches on date palms and rafflesia. (READ: Pinoy biologists challenge idea of plant life)

Purugganan obtained his bachelor’s degree from the University of the Philippines in 1985, and has moved to the United States since to pursue graduate studies.

He is part of the international scientific advisory board of the Philippine Genome Center (PGC), a multi-disciplinary research unit of UP Diliman, which organized the UP Diliman event. – Rappler.com