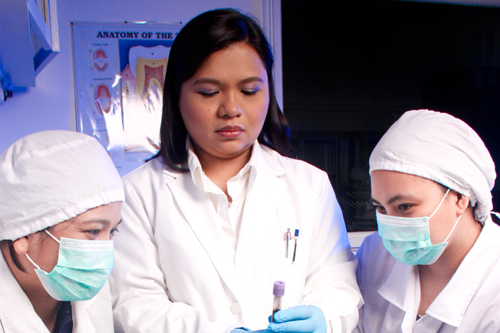 Dr. Maria Corazon de Ungria, director of the Philippine Genome Center’s Forensics and Ethnicity program shared the relevance of DNA tests in ‘crime-scene’ investigations as well as in identifying one’s parentage for custody or child-support cases.

Among the forensic sciences, the most recently introduced and among the most powerful means of identification is DNA technology. By taking advantage of one’s genetic code, it has become easier to link suspects to a crime based on biological samples found in crime scenes. By taking advantage of the hereditary nature of DNA, it has also become simpler to resolve issues of filial obligation, particularly in matters pertaining to child support or claims of inheritance. However, in order to successfully implement this technology at the local level, support from government and full cooperation of the community must be obtained.

There is an urgent need to familiarize stakeholders from the executive, judicial and legislative branches of government regarding the significance and limitations of DNA technology. For example, local government units should include forensic training in their mass disaster management strategies, if these exist. In disaster situations such as typhoons, flashfloods, fire and vehicular accidents, the identification of the dead has become a very expensive, time-consuming and drawn-out process due to the inability of governments to allocate resources to the identification of the dead during the early phases of rescue. However, after some time, the identification of the dead becomes a primary concern because the persons who survived the disaster need to find their missing kin in order to achieve closure, in the process of rehabilitation. In addition, legal concerns such as the issuance of death certificates for insurance and death claim benefits, inheritance issues, and re-marriage of surviving spouse, will continue to afflict the survivors, thus aggravating their suffering, if the remains of their missing relatives are not located. In a country that experiences an average of 20 typhoons per year, could we not formulate strategies for efficient and cost-effective identification of recovered bodies, for the sake of the living?