Aberrant TGFβ signaling pathway may alter the expression of down-stream targets and promotes ovarian carcinogenesis. However, the mechanism of this impairment is not fully understood. By ChIP-chip and expression microarray, we have previously identified several SMAD4 targets in an immortalized ovarian surface epithelial cells. Bioinformatic analyses identified several SMAD transcriptional modules that predict expression changes after TGF-β activation. Knockdown of SMAD4 in CP70 ovarian cancer cells showed an increase in promoter methylation in some of those SMAD4 targets as demonstrated by sequencing-based analysis. More Recently, by mathematical modeling, we have demonstrated a TGF-β inducible microRNA, miR-193a to be epigenetically controlled by E2F6. Such epigenetic silencing of miR-193a may induce a bistability of the ovarian cancer stem marker, c-KIT expression. The mechanism of epigenetic control in the expression of miR-193a will also be discussed. In conclusion, dysregulated TGFβ/SMAD4 signaling may lead to epigenetic silencing of a putative tumor suppressor during ovarian carcinogenesis. 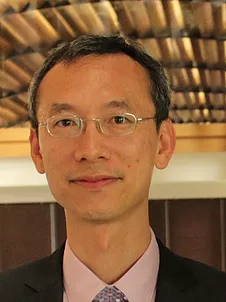 Dr. Michael Chan obtained his B.S. and M.S. from Department of Biology, Tunghai University, Taiwan. He then moved back to Hong Kong to study the genetic and epigenetic alteration of bladder cancer in the Department of Anatomical and Cellular Pathology, Chinese University of Hong Kong under the supervision of Prof. KF To and obtained the Ph.D. degree in 2002. After spending 2 years post-doctoral training with Prof. Francis Chan in Department of Medicine and Therapeutics, CUHK, he went to Prof. Tim Huang’s lab in the Ohio State University for another 3 years post-doctoral training. During the time in OSU, his research focused on epigenetics of ovarian cancer using microarray platform. In summer 2007, he joined the Department of Life Science, National Chung Cheng University in Chia-Yi, Taiwan to continue the research on cancer epigenetics. His laboratory now focuses on the role of cell signaling in the epigenetic alteration of tumor suppressor genes (TSGs) in human cancer. Specifically, his lab focuses on how aberrant JAK/STAT and TGF-β/SMAD4 signaling lead to epigenetic silencing of TSGs in gastric and ovarian cancer. Recently, together with several mathematicians, he has developed a mathematical model to predict how aberrant signaling confer epigenetic silencing of microRNA during ovarian carcinogenesis.