The Natural Sciences Research Institute’s DNA Analysis Laboratory (UPD-NSRI DAL), and the Institute of Biology and the College of Science of the University of the Philippines Diliman, and the Philippine Genome Center will host the Forensic Science Symposium 2016, bringing together local and international forensic experts at the SEAMEO INNOTECH Diliman, Quezon City from May 16-17, 2016. The 20th Anniversary of the establishment of the UPD-NSRI- DAL will also be commemorated
during the symposium.

Now on its third year, the conference will focus on the theme “DNA as a Catalyst for Change”, highlighting the importance of forensics not only in securing public health and safety but also in its role in creating a meaningful change in society. Genetic testing is an integral part of forensic science, used for the identification of the human sources of biological evidence, evaluating familial relationships, and distinguishing suspects from non-suspects, among its other applications.

Topics set in the global landscape will be discussed during the morning sessions, which will include the impact of DNA analysis on the investigation and prosecution of sexual assault to be discussed by Dr. George Frank Sensabaugh Jr. and the impact of DNA forensics in the criminal justice system to be tackled by Mr. Christopher Asplen.

In the afternoon, featured topics are set in the Philippine landscape such as safeguarding biodiversity through wildlife forensics by Dr. Perry Ong; DNA and child sexual abuse cases by Dr. Bernadette Madrid; forensic pathology practice by Dr. Raquel Del Rosario-Fortun; and forensic anthropology in the Philippines by Dr. Francisco Datar.

For the second day, the morning topics include how DNA profiling is applied in Malaysia where there are Islamic laws and ethnic traditions that must be respected by Pn. Nor Aidora Saedon; government efforts against human trafficking by IACAT Executive Director Darlene Pajarito; and disaster victim identification efforts after the World Trade Center by former Assistant Director to the New York Office of the Chief Medical Examiner and now DOST-PCIEERD Balik Scientist Ms. Sheila Dennis. Mr. Frederick Delfin will continue the discussions in the afternoon, with Filipino population genetics as the subject.

The symposium’s theme, “DNA as a catalyst for change”, will be covered on the second day, to be discussed by Dr. Maria Corazon De Ungria, University Researcher V and Head of the DNA Analysis Laboratory of NSRI and Director of the Philippine Genome Center’s Forensics and Ethnicity Program.

It was in 2014 when Forensic Biology students (BIO 397) organized the first Forensic Biology Symposium, Forensic Science in the Philippines: Status Challenges and Opportunities. The second symposium was held the following year, entitled Forensic Science Symposium 2015: The Next Generation/The Now Generation. The objective was to address the low public awareness on the significance of forensic science in the Philippines especially in criminal investigations.

Students, faculty, professionals from law enforcement agencies and relevant non-governmental organizations and all those interested in the study of Forensic Science are encouraged to join the symposium.

Visit https://3rdforensicsciencesymposium2016.eventbrite.com to sign up online. For more details about the event please call (632) 925 2965 or send an email to [email protected] 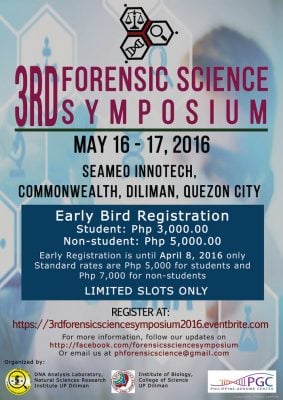 View all posts by rsbacsa